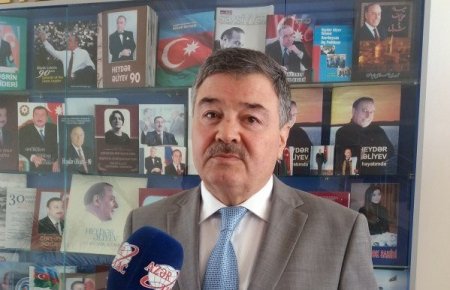 Our great leader Heydar Aliyev played a special role in the history of Azerbaijan, in the destiny of every son of the Azerbaijani people.
Eynulla Madatli, PhD in Philosophy, Deputy Director for Scientific Affairs at the Philosophy Institute of the Azerbaijan National Academy of Sciences, said this in an interview to AZERTAC.
He said Heydar Aliyev had gained the love of the people during his leadership in the USSR. At that time, they did not like party leaders. However, Heydar Aliyev gained this love with his work, the highness of his personality, the national essence of his work, and his commitment to the people. Heydar Aliyev managed to create a bridge between his people and himself with sincerity. It could be seen through the simple people, the collective farmers, and the love during the trips to the regions.
Eynulla Madatli said that at that time, our nation was proud of the National Leader Moscow, when he was invited to the USSR leadership. For the first time after Nariman Narimanov, a son of Azerbaijan was appointed to the post of Kremlin leader in Moscow. From that time, Heydar Aliyev always thought of his people and nation, supported the development of Azerbaijan, his decisions and his work. After the restoration of Azerbaijan's independence, the policy implemented by the country was regulated by the processes taking place within the country, the internal fighting was ended, and Azerbaijan suffered from the civil war. Azerbaijan has confirmed itself as an independent state in the political arena of the world. His political course is being successfully continued by President Ilham Aliyev today.
Eynulla Madatli stressed that Heydar Aliyev has left an indelible mark in the history of the Azerbaijani people. He will live in the heart of the Azerbaijani people with his practical work.
Azertag.az