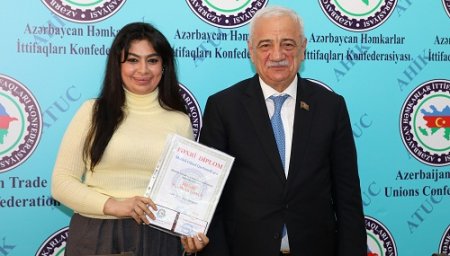 Head of the Department of the Institute of Philosophy and Sociology of ANAS, Doctor of Philosophy in Political Sciences, Associate Professor Gunel Malikli on May 11 was awarded for her articles "National priorities in Ilham Aliyev's political strategy", "Glorious history of the Azerbaijan National Academy of Sciences", and special achievements in labor, education and public activity the Professional Youth of 2021 with the Honorary Title and the Professional Youth of the Year Badge by Chairman of the Azerbaijan Trade Union Confederation Sattar Mohbaliyev.Gunel Malikli thanked the leadership of the Azerbaijan Trade Union Confederation for their attention and award.
It should be noted that during the awarding ceremony, young scientist Gunel Malikli spoke on the occasion of the 99th anniversary of national leader Heydar Aliyev.