The Institute of Philosophy and Sociology of ANAS hosted a conference entitled "Shusha Declaration in the context of the political heritage of the Great leader" dedicated to the 99th anniversary of the great leader Heydar Aliyev.
At the conference, Director General of the Institute, Doctor of Philosophical Sciences, Professor Ilham Mammadzadeh spoke about the activities of prominent statesman Heydar Aliyev in the socio-political life of Azerbaijan, noting that the study of his legacy is of particular importance both domestically and internationally. The scientist said that the great leader always paid great attention and care to the national and spiritual values of Azerbaijan, the monuments of material culture as the embodiment of the existence of the people and the nation.
Drawing attention to the essence of the Shusha Declaration, its historical significance, it is necessary to take an ideological and philosophical approach to important historical events and conduct analysis in this direction, said Ilham Mammadzadeh.
Then the executive director of the Institute of Philosophy and Sociology, Doctor of historical sciences Eynulla Madatli's speech entitled "Nakhchivan stage of the political activity of the Great Leader H.Aliyev", Prof. Rena Mirzazadeh's speech "Memories of the First Vice-President of Azerbaijan Mehriban Aliyeva about H.Aliyev", Doctor of philosophical sciences Fuzuli Gurbanov's thesis "Political Succession and" Karabakh is Azerbaijan ": Philosophical Analysis in the Context of the Shusha Declaration", Ph.d, Assoc. prof. Sholat Zeynalov's "Peace and security strategy of the great leader HA Aliyev: Shusha Declaration in the context of dialogue, space, time parallelism", Ph.d in political sciences Shahin Bagirov's speech "Historical and political significance of the Shusha Declaration", junior researcher Togrul Salmanzadeh's speech "Shusha Declaration in regional and international relations" were heard. 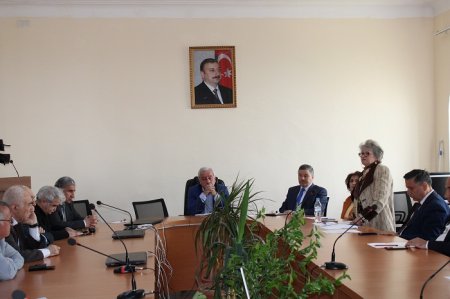 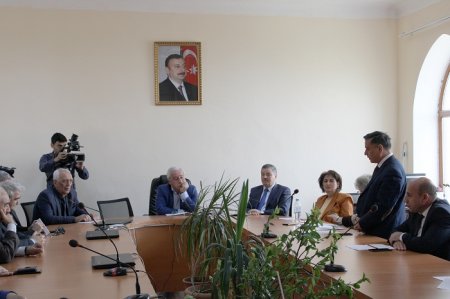